Warning: Use of undefined constant max_execution_time - assumed 'max_execution_time' (this will throw an Error in a future version of PHP) in /home/jejee/public_html/Blog/wp-content/plugins/automatic-youtube-video-posts/core/parse.php on line 31
 The Story Behind This Proposal Photo Will Make Your Heart Skip a Beat | Jejee Blog 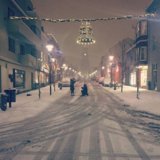 When British man Michael Kent took his now fiancée, Fiona Newlands, to Reykjavík, Iceland, to pop the question, all he could have hoped for was a “yes.” Little did he know that Jessica Bowe, an American living in the city, was taking a photo at the exact moment he got down on one knee.

Photographing the couple, however, was not her intention. Jessica wanted to “capture the falling snow in the midst of the twinkling holiday lights,” she told the Reykjavík Grapevine. After taking the photo, she posted it to Instagram, writing, “the man’s hands were trembling as he entered his email address on my phone, and I got some nice hugs of appreciation. Sometimes you’re just in the right place at the right time.”

Unfortunately, the trembling caused Michael to incorrectly type his contact information and the photo was never delivered. So he decided to take action and track down the woman who recorded one of the most pivotal moments in his life.

Dear Internet. Last night I proposed to Fiona Newlands in Iceland. A random woman took our picture as it happened (we…
Posted by Michael John Kent on Saturday, November 28, 2015

Along with posting his search on Facebook, he reached out to local Reykjavík news outlets via social media. His tireless efforts paid off, and the couple was reunited with Bowe – and her magical photo.

Reunited with @jrbowe, the photographer of the now infamous picture.
A photo posted by Michael John Kent (@themichaelkent) on Nov 30, 2015 at 4:58am PST

PREVIOUS POST ← How to Creatively Curse Around Parents and Small Children During the Holidays
NEXT POST Are You and Your Mom BFFs? Here’s How to Know For Sure →

In Sickness and in Health, This Couple's Sultry Desert Wedding Is a True Testament to Love

As Cliché as It Sounds, I Fell in Love on Valentine's Day

These Brides Eloped on a Rainy Day in Iceland, and Their Hiking Boots Are Everything